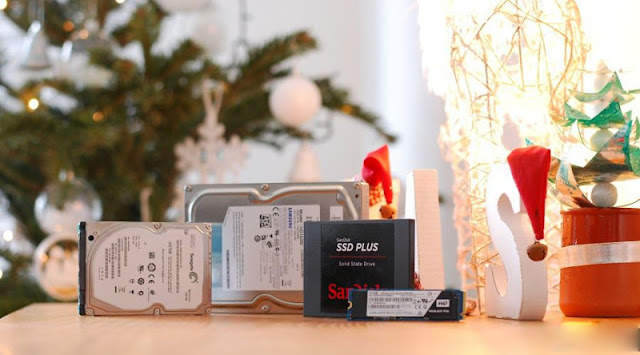 e ThSSD is made up of memory chips, such as USB flash drives and camera memory cards. The advantage of SSDs is that they are faster and more responsive than hard drives. And since there is no mechanical part, they are also much more resistant. On the other hand, they have a much higher cost: the 256 GB SSDs are sold at the same price as the 3TB hard drives (about 3,000 GB)! Whether for laptops or desktops, it is not uncommon to cross machines hosting both a SSD and a mechanical hard drive. The first will be the operating system (Windows, for example), the most used applications and games, while the second will be dedicated to simple storage (photos, videos, etc.).

Inside the SSD, there is a circuit board like here. Memory chips store data and are far less sensitive to shock and vibration than magnetic trays of traditional hard drives. They are thus resistant, especially since the writing endurance of chips has increased so much in recent years that SSDs have nothing to envy HDD at this level.

A cost per gigabyte that keeps going down
SSDs have continued to see their speeds climb, with more than 3GB/s for the fastest, when conventional hard drives are already struggling to exceed 200 MB/s. More than speed, it is the low latency - the reaction time - of SSD which is interesting, allowing to launch in a flash applications or parts of video game. Yes, but here, the increase in speed is such that, for home use, it is difficult to appreciate the differences in performance between the different models. Technology continues to evolve, however, and flash memory manufacturers are working to increase the density of their chips. The challenge now is, even more than before, to succeed in reducing the cost of production and, by the impact, of course the marketing.
Rumput & Kerikil
Add Comment
Hardware Misc
Monday, April 30, 2018
More From Author
Misc
Load More