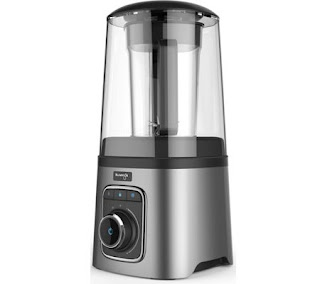 The Kuvings SV500 is part of the still undefined category of so-called vacuum blenders. Before mixing, a pump removes air from the bowl to prolong the life of the preparations. But are the smoothies made with the SV-500 really worth keeping?

PRESENTATION
Due to the maintenance subnote, we changed the final score of the Kuvings SV500. The maintenance part, as well as the conclusion, have been modified accordingly. Launched at € 699, the Kuvings SV500 is a blender with an advertised power of 1500 W. It stands out from the competition thanks to its vacuum pump that removes the air (therefore oxygen) present in the plastic bowl. with a volume of 1.3 liters. The oxidation of food is slowed down, allowing drinks that have been prepared this way to be kept much longer than those made with a conventional blender.

The carton of the Kuvings SV500 is well filled. In addition to the engine block weighing 4.46 kg, there is a noise-canceling bell, a vacuum storage container (0.8 l), a pestle, a large mixing bowl of 1.3 l plastic useful volume (1.85 l in total) and its lids: one for the classic mix and one for the vacuum mix (equipped with an anti-reflux valve).

The engine block, covered with plastic, houses the control panel consisting of three buttons and an imposing wheel, firmly attached to the assembly, whose center also serves as a power switch. Everything would be perfect if Kuvings had planned a cord storage like the WMF WMF416390011 - when you want to store the SV500, you have to wind the cable as you can, which is not very practical. No suction system holds the blender in place during the mix, but its heavy weight overcomes this problem.

The plastic SV500 bowl weighs 845 g with the normal lid (825 g with the vacuum lid), making it easy to handle. However, we have some doubts about its transparent appearance over time, because of microrayures that will not fail to appear, a problem that glass bowls do not know. Good point, we can put the bowl on the block with the handle to the right or left: this is not always the case.

The normal lid, equipped with a hatch for inserting food during mixing, uses a double seal system to ensure its tightness. Therefore, it is necessary to force a little to remove it from the container. This is also the case of the lid used for the evacuation which, he sees the hatch replaced by an anti-reflux valve: it will be necessary to shoot to get air into the bowl before hoping to remove the lid if the vacuum has been done.

A word about the noise bell: less imposing and more practical than the Philips Avance Collection Innergizer HR3868 / 00, it is easily positioned on the engine block. Good point, thanks to the handle located at the top, it avoids smearing fingerprints. Finally, she welcomes the witness who tells the user that the vacuum is made in the bowl.

The grip of the SV500 is no problem. The three keys allow you to empty, mix after emptying or start an automatic program without removing the air from the bowl. More demanding users also have the opportunity to fine-tune the delivered power (and therefore the speed of the blades) by turning the knob to the left: it's hard to be more instinctive.

Turning the rotary knob to the left activates the "Pulse" function, which turns the blades as long as the pressure is maintained. It is quite close to the "Pulse" function of the vast majority of blenders in our comparison , except that here, the blades do not rotate at maximum speed without interruption. The mix stops at regular intervals before resuming at the highest speed.

EFFICIENCY OF MIXING
The Kuvings SV500 is particularly fearsome. After 10 brief mixes at maximum speed (our test protocol in the absence of a crushed ice program), all 300 g of ice cubes that we inserted in the bowl were sprayed.

We were able to use the automatic program to make a smoothie more successful. It took only 40 seconds for the SV500 to liquefy the icicle, yogurt, banana and apple. At the end of the preparation, the drink was totally devoid of a piece of ice or fruit (detrimental to a pleasant tasting) and we did not feel very much the skin of the apple, that we do not peel to be able to judge the fineness of the mixing.

To ensure the tightness necessary for the vacuum, the bowl of Kuvings SV500 does not disassemble. More annoying (and despite the absence of electrical connectors), it is not possible to put it in the dishwasher, since the manual says not to immerse it. It will be necessary to return the forearm in the bowl to clean the blades in depth, an exercise little reassuring.

CONCLUSION:
Kuvings achieves a remarkable entry in our comparison with this very successful SV500, which we can not really blame a maintenance of blades not very obvious because of an indémontable bowl. Apart from this slight misstep which costs him his fifth star, this SV500, very versatile thanks to its precise wheel, performs a flawless mix and even allows himself to perform his office in a silence (almost) religious.
Rumput & Kerikil
Add Comment
Home Gadget
Saturday, April 28, 2018
More From Author
Home Gadget
Load More