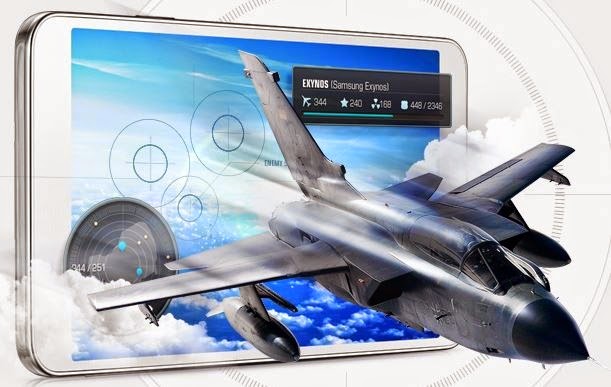 GPU war trends of smartphone manufacturers to make mobile appplication already begun Samsung processor with Exynos SoC, SoC Huawei with Kirin, and the last LG will release Nuclun SoC.
However, in contrast to SoC made by Qualcomm, Apple, or nVidia, third SoC made Samsung, Huawei, and LG are relatively the same if we look further into the CPU unit (general-purpose cores) and GPU units on the chip die-its .
All of three manufacturers still rely fully on the license ARM Holdings and other vendors, such as Imagination Technologies to be used on the CPU and GPU modules.
Samsung Exynos, Huawei Kirin, or LG Nuclun simply combining unit CPU of ARM (the only licensor) with GPU units whose licenses can be obtained from the ARM (series GPU Mali) or Imagination Technologies (PowerVR series).
On the CPU, all three rely only big.LITTLE ARM technology to combine the Cortex-A7 and Cortex-A15 for ARMv7 architecture (32-bit) or Cortex-A53 and Cortex-A57 for ARMv8 (64 bits). Kesamaam design of three vendors CPU unit is clearly different design or Nvidia Qualcomm CPU unit which holds the rights to license the ARM high and flexible.
High and flexible meaning here means Qualcomm and Nvidia further reserves the right to design the CPU unit to have its own character or differentiation compared to other ARM SoC market. This includes also the CPU unit with GPU units outside ARM Mali GPU Imagination Technologies PowerVR or.
Samsung realized that dependence on a licensor ARM CPU and GPU in the Exynos SoC manufacture only bring a positive value, that is the advantage of time-to-market compared to SoC Qualcomm or Nvidia.
Moreover, the performance and efficiency of the Exynos SoC, especially its CPU unit will be at the level equivalent to the standard SoC Kirin Huawei and LG Nuclun (for supported units of the same ARM CPU). Differentiation occurs in the selection of a new SoC GPU unit that serves as a kitchen runway 2D / 3D graphics tasks.
Option is usually only between ARM Mali GPU or GPU Imagination PowerVR (6/7 series). SoC Qualcomm and Nvidia does not rely on GPU technology licensing ARM or Imagination because they already have their own GPU design. Qualcomm and Nvidia GPU Adreno GPU graphics technology derived from its GeForce desktop.
Quite reasonable if Samsung also had the intention of designing a GPU unit itself and does not depend on the ARM or Imagination. Creating a reliable new GPU technology is not an easy issue. But with its resources and advantages Samsung forward to a variety of smartphones and tablets it, the presence of Samsung's new mobile GPUs can be realized.
The success of Apple's own SoC design (walalu still relies on licensing ARM and Imagination) for the iPhone and iPad could be an additional motivation Samsung to realize his intention. Samsung reportedly has been recruiting some AMD employees that have proven expertise designing GPU Radeon graphics for desktop and notebook.
GPU SoC design new Samsung predicted would be present at the next-generation 64-bit Exynos. Exynos SoC 64 bits of the first generation, the Samsung Exynos 7 Octa (Exynos 5433/7410) which is in phablet Galaxy Note 4 (SM-N910C) currently use GPU units of ARM (Mali-T760 MP6 at 700 MHz clock).
SoC with the feature set and instruction CPU and GPU unique that no other SoC manufacturers may be the end of the dream of Samsung. Keep in mind also, Samsung is is a founding member of the pioneering HSA (Heterogeneous System Architecture) foundation.
There is a possibility, upcoming Exynos SoC will be equipped with the full support of standard HSA (HSA compatible) which allows the GPU apply as stream processor for task (task) general (general-purpose) that this submarine carried CPU unit. That means, the Exynos SoC will be more powerful and efficient in carrying out various computing capabilities in the future process.
Rumput & Kerikil
Add Comment
Smartphone
Thursday, December 25, 2014
More From Author
Smartphone
Load More