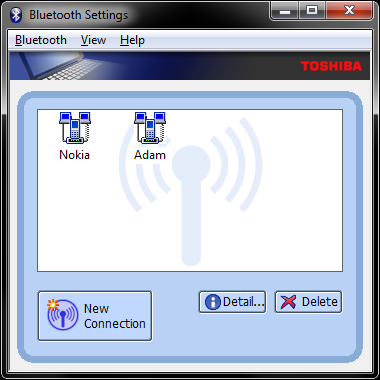 Bluetooth technology proposed by Ericsson and then together with IBM, Intel, Nokia, and Toshiba formed the Bluetooth Special interest Group (SIG) in 1998, followed by large companies such as Microsoft, 3Com, Lucent, and Motorola.

The name Bluetooth is taken of the name of the king of Denmark, Harald Bluetooth. The purpose of designing Bluetooth is a technology that is cheap, reliable, low-power, and efficient.
Characteristic Description
Physical Layer Frequency Hopping Spread Spectrum (FHSS)
Frequency Band 2.4 to 2.4835 GHz (ISM band)
1600 Frequency hop hop / sec
Data rates of 1 Mbps (raw)
Data and Network Security? Three security modes
- Two levels of device trust
- Three levels of security service
- Encryption for confidentiality stream,
- Challenge response for authentication,
- PIN-derived key
- Limited management
About 10 meters range and can be expanded up to 100 meters
Throughput ~ 720 kbps
Excess? Without cable,
- The signal can penetrate walls / obstacles,
- The cost is relatively cheap,
- Helpless low, and
- Hardware is relatively small.
Disadvantages? Possible interference with other technologies that use the ISM band,
- Data rate is relatively low, and
- Weak signals outside the limits.
Bluetooth is designed to support data and voice applications. A type of channel Synchronous Connection-Oriented (SCO) and Asynchronous Connectionless (ACL) is used to support the service class.
Bluetooth Package Format
Bluetooth uses the packet format as shown in Figure 1.1. package is divided into three parts, namely:
1 72-bit access code
2 54 bit header
3 Payload for 0-2745 bits
Access code has three functions, namely synchronization, DC offset compensation and identification piconet. Sliding correlator used to synchronize access code. Access code also includes a sequence of 4 bits for the DC offset compensation. Inin sequences located at the beginning of the access code. Each piconet is assigned an identifier obtained from the identification of the master device that connects each separate package to a piconet. The process for obtaining the value of identifying the presence of a piconet guarantee a minimum Hamming distance between the identifier.
Packet header contains information pertaining to the relationship between the piconet. The information included in the header, among others, addresses members of the piconet (0-7), package type, and general flow control. General flow control consists of a sequence number and an acknowledgment bit. The header also contains a header error control word. Large packet payload has a varied and protected by FEC.
Several types of packages have been specified to support each type of channel. The types of package are as follows:
1 package common type
There are five types of packets that ID, NULL, POLL, FHS, and DM1.
ID packet consists of a reduced-length access code at 68 bits without the header and payload. This package is used to perform activities such as paging, placing inquiries and send a response. ID package is the only package that has a reduced-length access code. This package is very powerful because it uses a sliding correlator for receiving the access code.
NULL and POLL packet consists of access code and header without payload. What distinguishes these two packages is the POLL packet asking for a response, but the package is not NULL.
FHS packet consists of a payload of 240 bits including the use of Hamming code. This package is used to support multiple tasks such as clock synchronization, paging settings, and a description of the access code.
DM1 packet is a packet that corresponds to the architecture of the package can be considered sabagai ACL and ACL packets but not limited to the ACL channels only. This package is used to provide control information asynchronously through SCO channel and also carry data or control information through the channel ACL.
2 Package ACL
There are 7 types of ACL packets that AUX1, DM1, DH1, DM3, DH3, DM5 and DH5, which are all designed to support data communication. Except for the AUX packet, all packets are protected with ARQ scheme.
3 Pack SCO
SCO packet consists of DV, HV1, HV2, HV3 and. SCO packets are used to carry voice information. Except for the DV packet, the packet SCO does not use ARQ schemes such as the ACL package.
Bluetooth component
A Bluetooth system consists of several components that vary depending on whether the Bluetooth module is independent of the host or implanted.
These components are as follows:
- RF for delivery of data and receiver
- Module with baseband microprocessor
- Memory
- Interface to the host device (PDA, mobile phone, etc.)
- Range of Operation
Based on its operating range, Bluetooth devices are divided into three classes, namely:
- Class 3 devices
Bluetooth devices that have a transmission power of 1 mW and a range between 0.1 to 10 meters.
- Class 2 device
Bluetooth devices that have a transmission power of 1 to 2.5 mW and a range of about 10 meters.
- Class 1 device
Bluetooth devices that have a transmission power of 100 mW and reach as far as 100 meters.
Conclusion: Bluetooth is a technology that allows two compatible devices, such as phones and PCs to communicate wirelessly and does not require connection visible channels. Surplus, the signal can penetrate walls / obstacles, costs are relatively cheap, low Helpless, and the relatively small hardware
Rumput & Kerikil
Add Comment
Hardware Knowledge
Saturday, September 27, 2014
More From Author
Knowledge
Load More